Basics: Creating short commands and triggering them with NFC tags

The use of the smartphone consists of a countless number of possible operating steps and handles. Some of them are simple and quick, others are more time-consuming and complex. In order to keep the use of the smartphone "smart" even with the rapidly increasing number of possible uses, operating steps can be shortened by executing them automatically. From simply switching on/off the flight mode, or the alarm, to creating notes, reminders, playing music or sharing a photo or video on social platforms: Almost any operating sequence can be summarized and executed automatically as a whole. An NFC chip can be used as a trigger for this automation if it is described accordingly beforehand. The automation only needs to be created once and can then be executed in the future simply by contacting the smartphone and the NFC chip.

The only prerequisite for this: writable NFC tags, such as those available in our NFC starterkits. This How2 first introduces some basic terms of the app shortcuts, and then shows how an action can be started automatically using NFC tags. 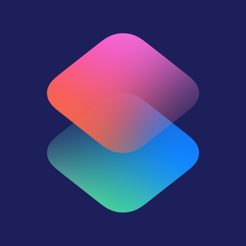 The app Shortcuts for iOS was developed by Apple to combine complex action sequences into a single command. With each new version the possibilities of the application have been continuously expanded. In the following, some basic terms will be clarified first.

Operating steps on the smartphone are called actions. Actions are, for example, opening the camera, opening an app, or activating flight mode. Normally, the actions are executed by us as users one after the other.

In a shortcut, several actions are linked and executed together when the user starts the shortcut. If the shortcut is not triggered manually but automatically by an event (e.g. contact with your NFC chip), this is called automation.

A typical trigger for an automation can be, for example, reaching a certain time, arriving at a certain place, or, as in our application example, contact with an NFC tag.

A new automation can be created using the Automation tab at the bottom.

In the following display we have two options, we will focus on the first one:

Via Create Personal Automation we can create our own automation.

NFC chip as trigger for automation

By tapping Create Personal Automation we find a list of possible triggers for our shortcut. Scroll down, find NFC and select this list entry.

In the following we can scan and name the empty NFC chip by scanning it.

For our application example we name the scanned NFC chip Record.

Then we tap on Done and Next.

Add a action to a automation

With Add Action we can now define a first action. Apple helps us here by categorising possible actions.

In our example we use the search function in the upper part of the screen. Since the shortcut is to start an audio recording, we enter the keyword audio in the search field. The search result Record Audio matches our goal - we select it.

Additional parameters for the short command

After selecting Record Audio, this shortcut appears in the list. By selecting Show More, you can set additional parameters here, which may vary depending on the type of action.

In general, it is recommended to select the option Immediately under Start Recording. In this way, the short command starts immediately after contact with the corresponding NFC chip without the need for additional screen input.

In our example, we select the option Finish Recording On Tap. Thus, the audio recording ends as soon as the screen is touched.

With Next, the action is added to the shortcut.

In this first How-To, a new automation was created that starts an audio recording when the corresponding NFC tag is touched and stops it when the screen is touched.

In the article Executing multiple actions in a row through an automation we explain how to add further logical steps to this action that extend our automation in a useful way - in this case automatically saving the recording in the iCloud Drive after it is finished.

FAQ: NFC with the Smartphone Advanced: Performing actions through an automation iOS: Label the NFC Cube iOS: Read NFC tags with NFC21 Reader Create complex automations Start music playback via a Bluetooth box with NFC Filter contacts directly with an NFC-tag Search for ready-made shortcuts and save them to an NFC tag Start app with NFC tag